Bike up the backside of Palomar Mountain. Get a great workout while enjoying some solitude and splendid views of the San Diego back country, including Vail Lake and numerous snow-capped peaks (Thomas Mountain, San Jacinto, and San Gorgonio). This is nontechnical mountain biking at its best. If you like a climb with views, it’s a good one. Exceeded my expectations.

Their loss, our advantage.

We turned around at mile 8 as the trail was getting muddy and we were running out of daylight. It’s worth coming back to finish it off. Will update this post when I do. Until then, let the good times roll! What a spectacular way to spend the first day of 2020!

Difficulty: Depends on your fitness level, knee health, and affinity for climbs. Very doable, the super steep sections are relatively short. Terrain has some rutty sections, but mostly good. This would also be a great trail run, or training for the Catalina Marathon, or any endurance races.

Directions: From Temecula, take HWY 79 east for 18 miles. Stay on HWY 79 and make a right 2/10ths of a mile past the junction of HWY 371 to an RV park/resort. Follow the paved road for 0.3 miles then park in the large dirt area in front of the Fire Service Road 8S05

Notes: There’s no water along this exposed route—plan accordingly. It’s hot during the summer and you may encounter snow during winter, or mud after heavy rains or melts. Vehicles are allowed on this route, but seasonal closures for motorized access often occur. (A bonus for mountain bikers and trail runners.) Further up the mountain, the Forest Service has labeled the High Point Truck Trail (8S05) as 9S09 between this junction and the Palomar Divide Truck. When in doubt, stay on the most “main” looking route.

Bonus: Be sure to top off your ride with a visit to Ricardo Breceda’s amazing outdoor gallery of metal sculptures. Also, check out his work in wild open spaces of Anza Borrego too!

If you like alpine lakes, sublime scenery, and trail terrain that’s gentle on feet (good for trail running too), you’ll want to spend a day here, immersed in natural bliss. I loved this hike. The lakes and mountain scenery are SPECTACULAR. It felt easy to me despite my hiking book’s rating of it as a 4 out of 5 for difficulty due to the 2,100 ft elevation gain. The trail is quite gradual with many switchbacks, but it didn’t really seem like a big climb. Maybe I just woke up strong and altitude acclimated. The good news is the elevation gain keeps the crowds away.

There was something magical about this tree. Look for it on the trail after Lake Sherwin and let me know if it stopped you in your tracks too. The pictures don’t do it justice. I named it the Medusa tree. 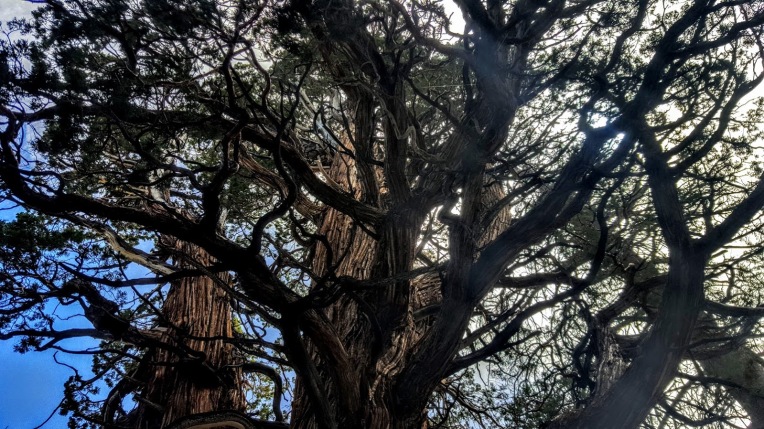 If you’re not up for hiking up to Valentine Lake (9,698 ft – 5.6 miles), you can always make Sherwin Lake (2-3 miles) your destination instead, but just so you know, you’ll be missing this:

Valentine Lake, you stole my heart and nearly froze it too! I can’t resist the allure of an alpine lake, even when it’s snow melt cold. Can you?

My boyfriend was taunting me in the video below. Note: HE DID NOT JUMP IN THE LAKE. (And somehow I resisted pushing him into it.)

Cowles Mountain  (1,593-foot summit) is the highest point in the city of San Diego. It’s part of Mission Trails Regional Park, a 5,800-acre open space preserve that is the 7th-largest open space urban park in the United States. It contains sixty miles of hiking, mountain bike and equestrian trails.

To call Cowles a mountain is to be very liberal with the word. I should note that the park has a 5 “peak” challenge if your hiking peeps want a minor challenge and want to document your feats – here’s the scoop. Cowles is the highest peak. This might be fun for kids, but apparently lots of adults do it for bragging rights too. I will say that on a clear day, the stunning views span 360 degrees from Lake Murray, downtown San Diego, Point Loma, La Jolla, and Mexico and out across the glimmering Pacific to the San Carlos Islands. See feature picture above. (Unfortunately, I dropped my camera on a rock so I have limited pics.)

It’s a very popular trail so expect lots of humans and their canines…There are a couple of different ways to reach the top from various starting points and parking lots. The hike itself is moderate (with some steeper sections that will get those calves & glutes burning). It’s decent workout, especially if you run it. There are single track trails and some fire road. It’s short from any direction so I explored up and down on a couple of trails and was a little disappointed that there wasn’t more to see. You can’t really get lost so do as much or as little as you like.

Since I didn’t quite get enough enough of a workout  / nature fix, I decided to check out alluring Lake Murray  Reservoir, also part of the Mission Trails Regional Park. I strolled the paved road that navigates around most of the lake stopping short of the dam (no access). It’s another popular spot – walkers, runners, bladders, and even road bikers aplenty (the latter seems silly to me, because the path / road is only 3.2 mi long and there are many children and dogs on it).

Lake Murray is a great spot for birdwatchers with abundant ducks, geese, and herons abound and about 149 bird species to observe. It’s a pleasant spot for a picnic too.

Lake Murray is open for shore fishing and private boats, kayaks, and float tubes seven days a week from 5:30 a.m. to 8:00 p.m. Permits can be purchased onsite at the iron ranger boxes. The lake is stocked with Florida-strain largemouth bass, bluegill, channel catfish, black crappie, and trout. Minimum size limit for bass is 12 inches. 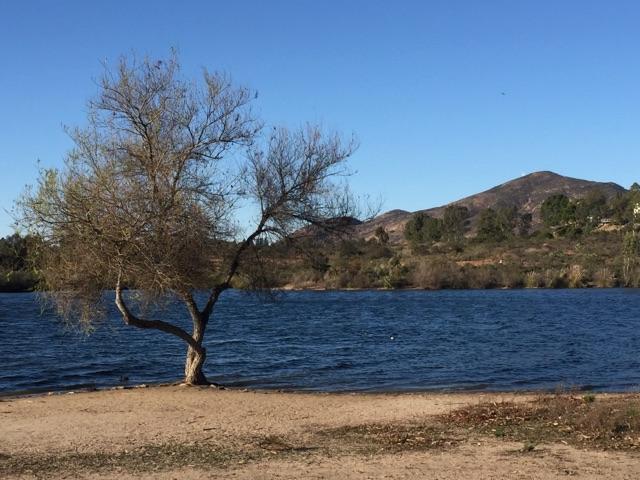 The park covers 600,000 acres and is the largest state park in California and, the second largest in the contiguous United States. It contains 500 miles of dirt roads, 12 designated wilderness areas, and 110 miles of hiking trails.

The endangered peninsular bighorn sheep, often called desert bighorn sheep, make their home here. It’s said that visitors and residents seldom get to see them as they avoid human contact.

We arrived at the park about 45 minutes before sunset (golden critter hour) and decided to go for a quick run up the scenic and pleasant Borrego Palm Canyon Trail (3.25 miles) before dark.

We looked up the steep rock studded canyon walls at precarious boulders, wondering if they ever dislodged…We walked part of the way back hoping to see some wildlife.  I told Ken to keep his eyes open. I have terrible eyesight and the stone and sunset shadows are perfect camouflage for anything that wants to evade notice. Then I heard something that sounded like a boulder crashing down…and Ken saw something in the distance…The head bangers in action! A group of 5, the one sitting on the rock officiating looked frail, perhaps an elder. I felt like I was in a National Geographic show. It was amazing!

The next morning we had breakfast at the local coffee shop. While we were there, we struck up  a conversation with a ranger and local at the next table. We shared our adventure and the video on my phone. There was an elderly couple standing nearby, watching me with annoyed faces and their arms  crossed. (Was I talking too loudly or did I steal their table?) Nope, the woman finally broke her silent glaring and told us in an exasperated voice that they had been hiking the canyon nearly ever day for years and had never had a big horn sheep sighting – not even 1. That’s how lucky we were.

Turns out one of the fellows that we were chatting with was the co-creator of the Desert Bighorn Sheep Book that I was browsing through. How cool is that?

And if all that wasn’t magical enough, on our drive out of the park, this healthy coyote couple appeared to see us off.

What are your most memorable wildlife sightings?

The Santa Margarita River, aka Temecula Creek / Temecula River, is one of the last free-flowing rivers in Southern California.

The park is said to contain 1400 acres with 14 miles of trails that loop and crisscross the river. Not sure about that, but I do know that the main trail is about 5.5 total out and back. There are a number of offshoot trails, but it’s hard to imagine that they add up to 3x as much distance…

The main trail is a pleasant meander along the river under a canopy of trees.

There are a couple of swimming holes within the first mile or so if you care to take a dip. Before too long you’ll encounter your first of a half dozen creek crossings. Since the terrain is mostly smooth path or sandy, you might consider Tevas, instead of running shoes or hikers as you’ll be taking them on & off frequently. (That being said, if you don’t mind getting your running shoes wet, it’s not a bad spot for a little trail trot.) There are also a couple of lovely little oases along the way. 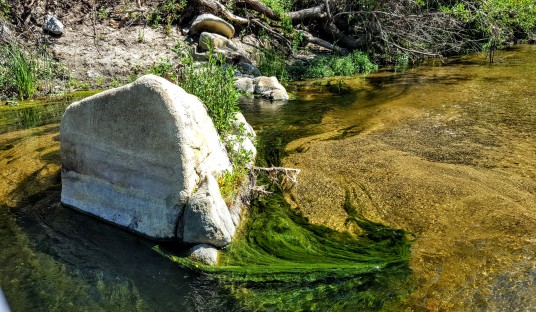 Apparently, this river corridor is known for raptor sightings and home to deer and other large mammals. We saw one shy turtle basking on rocks and a little fishey who seemed to be guarding her eggs – see video below.

Certainly a great spot to spend an afternoon, have a picnic or take a dip. (I wouldn’t drive too far for it, but if you’re in the area by all means.)

Note: It gets super hot in Fallbrook in the summer, be prepared and bring water.

Location: Fallbrook near De Luz Road & Sandia Creek Dr intersection, right on Sandia Creek Dr. then the parking area and trailhead are 1.2 miles ahead on the right.

On the Loose Live