A couple years back, I went for a pleasant mountain bike ride with a friend and have been wanting to return for a while.  I couldn’t remember exactly where it was.  Fortunately, my friend has a reliable memory and was able to direct me back to the spot. It’s part of the Coast to Crest Trail and in the San Dieguito River Park  (92,000-acres)

If you read my Lake Hodges MTB post, this spot is on the other side of the I-15 freeway. The trail begins at the historic Sikes Adobe. 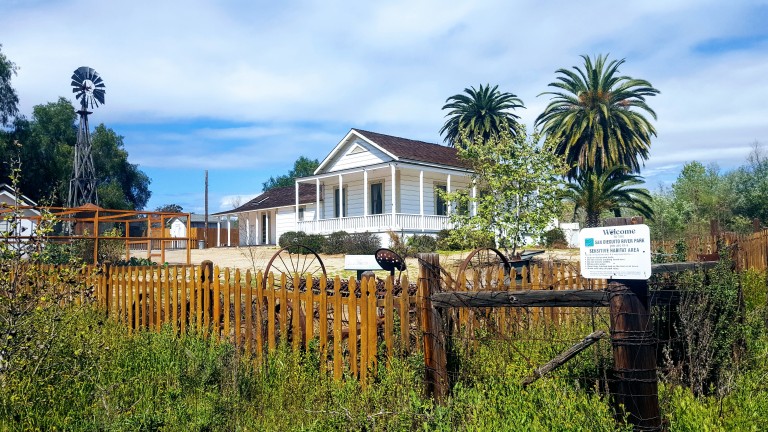 Established around 1870, the Sikes Adobe Historic Farmstead is one of San Diego’s oldest adobe homes. Tours are offered on Sundays, more info here.

The first 3-4 miles or so are completely flat with easy terrain and valley views. Perfect for beginners and kids. Next you have 2 options, you can climb up some lovely single track to the Raptor Rodge lookout (and continue on to Ysabel Creek RD Staging Area) or cross  the road to the Old Coach Trail and climb a steep paved road.

(I did both this time.) Previously, I had chickened out of the Raptor Ridge single track as it looked a bit rutted. This time it appeared smooth so I went for it and didn’t regret it. What a sweet ride, great for a trail run too. Only ran into 3 people out there despite a sign warning about congestion on the trail. It was gorgeous and a decent workout. Distance to Raptor Ridge is 6.1 miles ea way. The lovely valley views really open up as you climb. Once at the top, you can continue on down to the to the Ysabel Creek Road Staging Area, a somewhat rutted and scrappy fire road. Unless you have a car shuttle, you’d have to climb back up that road. I opted to return to the intersection and  climb up the Old Coach Road instead. Once you navigate through the grove of trees and climb the steep paved road, you can continue to follow the Old Coach Trail signs across the 2 residential roads until you get to the single track. (I haven’t followed the single track to see where it goes as it’s gets a bit technical for me – trails is rougher, rocky, etc…) And the map ends at the paved road. Perhaps I’ll have the gumption to explore more next time.

Raptor Ridge is aptly named. This area is great for bird watching. 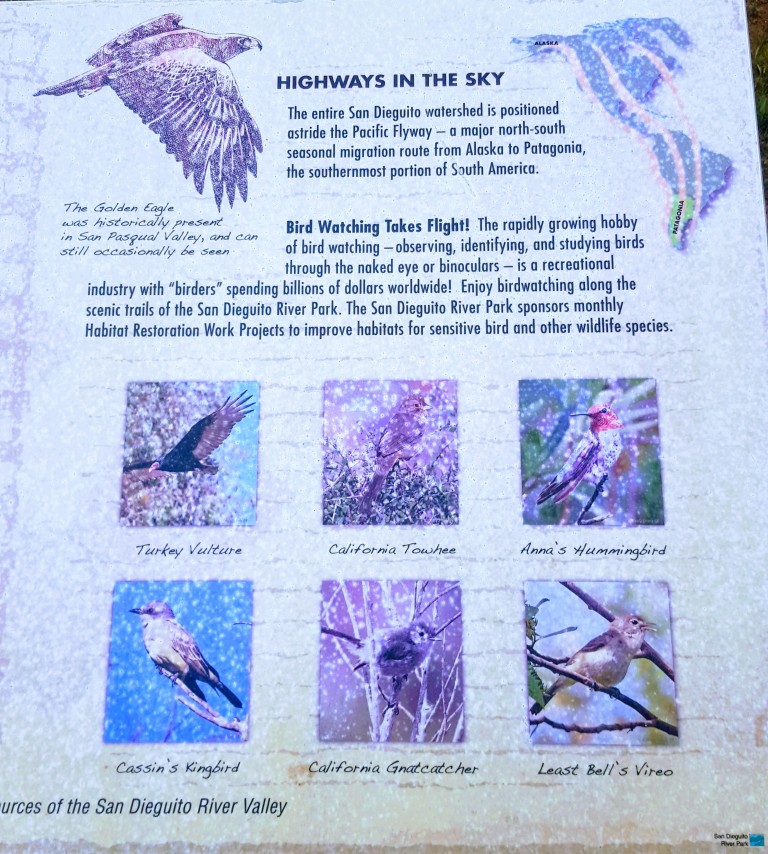 Wonderful, well kept trails make for a splendid afternoon on foot or wheels. Gets hot in the summer so go early and bring water.

Cowles Mountain  (1,593-foot summit) is the highest point in the city of San Diego. It’s part of Mission Trails Regional Park, a 5,800-acre open space preserve that is the 7th-largest open space urban park in the United States. It contains sixty miles of hiking, mountain bike and equestrian trails.

To call Cowles a mountain is to be very liberal with the word. I should note that the park has a 5 “peak” challenge if your hiking peeps want a minor challenge and want to document your feats – here’s the scoop. Cowles is the highest peak. This might be fun for kids, but apparently lots of adults do it for bragging rights too. I will say that on a clear day, the stunning views span 360 degrees from Lake Murray, downtown San Diego, Point Loma, La Jolla, and Mexico and out across the glimmering Pacific to the San Carlos Islands. See feature picture above. (Unfortunately, I dropped my camera on a rock so I have limited pics.) 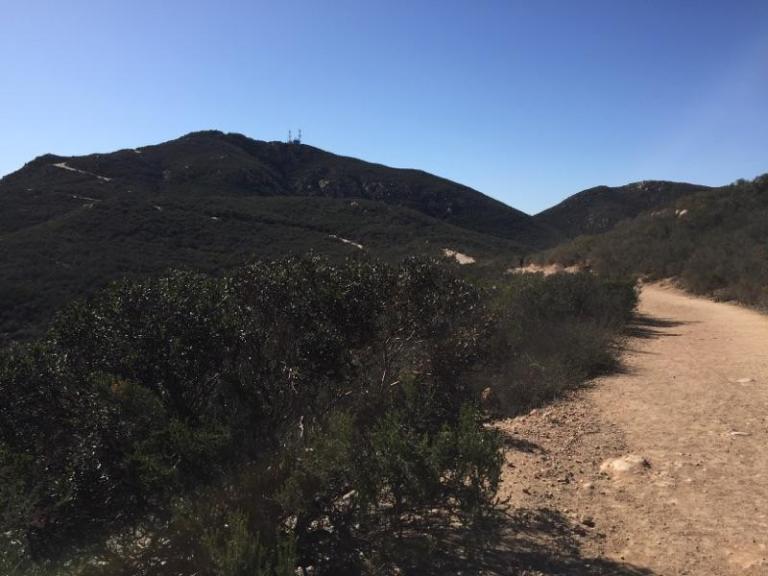 It’s a very popular trail so expect lots of humans and their canines…There are a couple of different ways to reach the top from various starting points and parking lots. The hike itself is moderate (with some steeper sections that will get those calves & glutes burning). It’s decent workout, especially if you run it. There are single track trails and some fire road. It’s short from any direction so I explored up and down on a couple of trails and was a little disappointed that there wasn’t more to see. You can’t really get lost so do as much or as little as you like.

Since I didn’t quite get enough enough of a workout  / nature fix, I decided to check out alluring Lake Murray  Reservoir, also part of the Mission Trails Regional Park. I strolled the paved road that navigates around most of the lake stopping short of the dam (no access). It’s another popular spot – walkers, runners, bladders, and even road bikers aplenty (the latter seems silly to me, because the path / road is only 3.2 mi long and there are many children and dogs on it).

Lake Murray is a great spot for birdwatchers with abundant ducks, geese, and herons abound and about 149 bird species to observe. It’s a pleasant spot for a picnic too.

Lake Murray is open for shore fishing and private boats, kayaks, and float tubes seven days a week from 5:30 a.m. to 8:00 p.m. Permits can be purchased onsite at the iron ranger boxes. The lake is stocked with Florida-strain largemouth bass, bluegill, channel catfish, black crappie, and trout. Minimum size limit for bass is 12 inches.

My back was a little tweaked from last week’s roller blade when I used my butt as a brake so I was looking for something mellow to do this weekend. That’s when I thought of mt.biking around Lake Hodges on the flat section of the San Dieguito River Park Coast to Crest Trail.  This multi-use trail is open to hikers/runners, mountain bikers and equestrians. The main trail (a planned 70 miles – 45 miles of which currently exists ) extends from Del Mar to Volcan mountain in Julian. And there are over 20 miles of auxiliary trails within the River Park to play on.

I chose an easy cruise on a friendly wide dirt trail through the North side of the park. If you add on some single track on the flip side, you can make it around to the dam.)

(Option to stop in for some refreshments at Herandez Hidaway on Lake Drive.) We passed it up because my back was acting up (could have been the three falls). There are only about 3 spots where a mtb novice or clutz like me needs to walk (should have walked) hence the falls. Otherwise, super pleasant, beginner mtb trail. Managed to get about 16 miles in on the out and back.

I’ve ridden and run the South side too – not as much mileage there and much better views on the North side, in my opinion. If you’re tough and technical, you can go for the Bernardo Mountain Summit trail – looks fun. You can also find more trails under the pedestrian bridge, but you may encounter some challenging single track there. (I might hike a couple of these to scout them first and report back. I suspect they won’t be as scenic since they ride away from the lake.)

There are a number of ways to access the trails. The pedestrian / bike bridge is a good a starting point for explorations North or South.

I-15 freeway to West Bernardo/Pomerado Road, go west and park in the Bernardo Bay parking lot on the right just before Rancho Bernardo Community Park,

Or perhaps consider parking your car at Hernadez Hideaway on the other side of the lake so you can look forward to lunch and libations after your ride.

It's amazing how changing your perspective changes your outlook in photography and life in general. These 2 pictures are of the same tree--shot from opposite directions. If you don't like what you see in your mind's eye, turn around.😉 Which do you prefer?
Rewards off the beaten path
You may have discovered that some places appear cooler than are on IG😉 They also may have cool names like "Belly of the Dragon", the manmade drainage canal under highway 89 that might keep the kiddos amused for a bit. Photo ops are 👍, but wouldn't go out of my way. Post is up👉onthelooselive.com, search by dragon
A lesser known, colorful little slot canyon in UT. Hints @onthelooselive.com
Guardian of a colorful slot canyon somewhere in UT...
More scenes from Goblin Valley. IG forces a lame crop. See the full pics 👉onthelooselive.com, or go to GVSP and take your own.😉
Goblin Valley Adventures Haven't posted in ages, i know. So far behind and been feeling ambivalent about posting in general. For me, nature is about solitude. I figure posting about mainstream places is ok, but keeping those less traveled places less trampled is important. Obviously, i really enjoy photography so that may become my focus here without tags, descriptions, etc-we'll see. Get the scoop for this mainstream adventure 👉onthelooselive.com
Support Ukraine and get your contribution doubled/matched, using the link below, thanks to Mila & Ashton👏🙏 Please Share! #celebswhoputtheirmoneywheretheirmouthis : https://www.gofundme.com/f/stand-with-ukraine?utm_source=customer&utm_medium=copy_link_all&utm_campaign=m_pd+share-sheet
Strong side eye to 2021. (In truth- grateful to friends, family, and Mother Nature who made it a wonderful year) Pic 2- looking fully forward to 2022 adventures! (One of these days, I'll catch up on my posts-nope- having too much fun playing outside!) Cheers to another year of excellent explorations!
Flashback to Fall along the colorful Kolob Arch trail. Experience Zion vibes without the Zion crowds. Great for trail running and backpacking. Get the scoop👉onthelooselive.com, search by Kolob.
Mesmerizing, wild, wonderful Point Lobos State Park never disappoints. Get the scoop👉onthelooselive.com, search by Lobos.
Capitol Reef, a different view at every turn.
The many sandstone faces of Capitol Reef, a visual feast.
Scene from a recent Capitol Reef Sampler
The summit of Mt. Timpanogos rewards with dizzying 360 degree views of Utah Valley and Utah Lake to the West & Lone Peaj and Marican Fork Twin Peaks to the North. If you're lucky you may share the views and trails with the resident mountain goats. Can you make the king of the mt. out in pic 4?The peak is snow covered currently, which gives you an idea of how far behind I am in my posts.😉 Get the scoop on this epic hike👉onthelooselive.com, search by Timpanogos
A daunting mile and a half avalanche field of talus & scree deter many from summiting Mt. Timpanogos. Get the scoop on this epic hike👉onthelooselive.com. search by Timpanogos.
Emerald Lake, just one of the many magnificent sites on the way up Mt. Timpanogos. Post is up on this fantastic hike👉onthelooselive.com, search by Timpanogos
Wildflowers and Waterfalls, 2 of my favorite things. 🥰 Mt. Timpanogos 💜1 of my favorite hikes! Find out why👉onthelooselive.com, search by Timpanogos
👌views biking to Cape Royal, North Rim Grand Canyon. Get the scoop on the 2 splendid, scenic road bike rides👉onthelooselive.com, search by North Rim
Things you see cycling the N. Rim of the Grand Canyon. Feels like more bison than people!😃 (North Rim receives only 10% of the visitors that the South Rim does.) Get the scoop on 2 splendid scenic road rides here.
Scroll to Top
On the Loose Live