A designated national natural landmark and wilderness study area, Hell’s Half Acre Lava Field is a basaltic lava plain found in the desert ecosystem of the Snake River Plain of Idaho.  It consists of about 150 sq miles of other-wordly terrain created by a lava flow from about 4,100 years ago. There’s a 1/2 mile trail marked by blue poles, you can follow those to the red poles that lead you out 4.5 miles to the central vent, where the lava broke through the surface thousands of years ago  (9.4 mile round trip).

Hiking across a lava field is not for everyone, especially not for the tender footed. It’s cool, but the novelty wears off fast. While the trail is flat and easy, the terrain itself is tough and unforgiving. Lava rock is extremely sharp – like glass shards- and fragmented and the field is a trap of open cracks, gaping holes, jagged rocks and uneven, tortuous footing. It’s slow and treacherous going. One misstep can land your foot or your body in a hole. And if you trip, you’re likely to be broken, bruised or bleeding. Sneakers are not enough, the lava will eat them up. I’d recommend sturdy hiking shoes even for the short stroll. Also, it’s easy to get lost in the vast monotonous beauty of the lava field, you really have to look for those trail pole markers. Not a hike to set the kids loose on. Do not attempt the long hike in the summer as this place gets hot as hades. 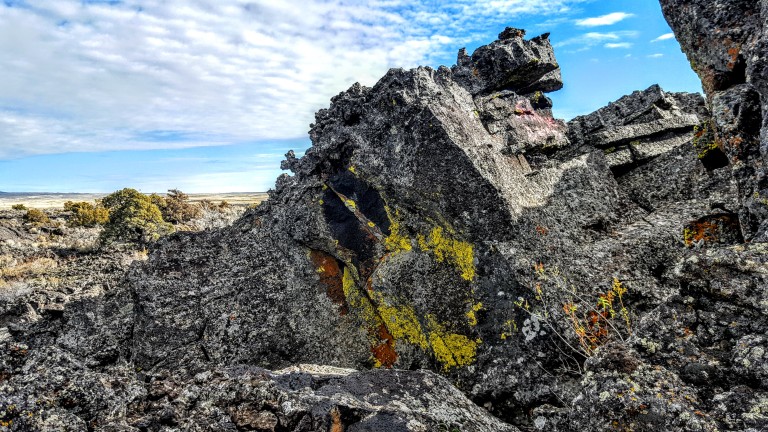 Normally, I’m up for a hiking challenge, but I was happy to keep it short here, especially when I heard the rednecks firing shotguns close by…(sigh).

You have to look for the Hemingway monument, it’s not visible from the road, but the sign is. The monument is a bronze bust of “Papa” propped upon a stone column. It’s situated along a meandering stream, suitably facing the mountains. (Not so suitably,  directly adjacent to a golf course.) 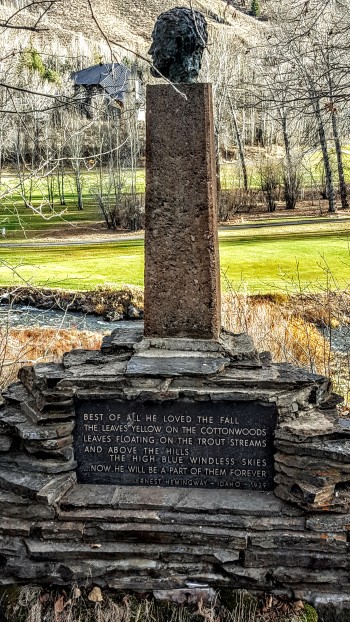 Anyhoo, the words inscribed on the monument are part of a eulogy Hemingway wrote for  Gene Van Guilder, a publicist for the Sun Valley Resort, who died in a hunting accident. Nice, but a bit flowery compared to his customary, terse writing style…

While the monument itself was a bit anti-climatic. (Not quite sure what I was expecting.) The mysterious poem that was tucked into the rocks at the foot of the monument was quite intriguing and made the stop worthwhile for me… 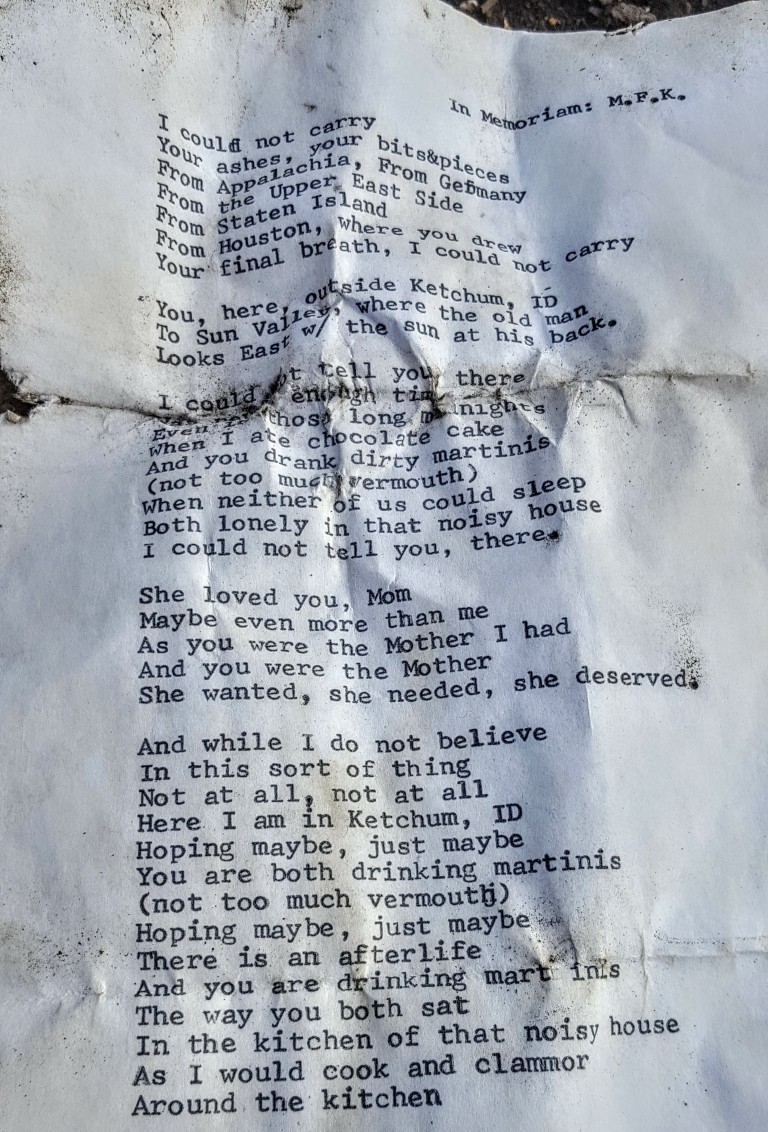 Touching and well written. (Also interesting that it appears typewritten old school.) I did think twice about posting it since it’s quite personal and in memoriam. But it so’s beautiful and worth sharing. Also, I rationalized that anyone who deliberately leaves something at what constitutes a tourist stop may want that thing to be discovered. After capturing it with my camera, I did fold it back up and slip it back between the rocks. No doubt the elements of this snowy winter will take the final toll.

Many people aren’t aware that Hemingway was also a poet. Perhaps that’s because he only published 25 poems during his lifetime.  Minus 4 personal poems that his widow did not make available for publication, the remaining 88 poems can be found in his “Complete Poems“.

For those into Hemingway memorabilia, there’s a cool vault room in the Sun Valley Starbucks / Visitor Center featuring larger than life size pics of him and his cronies.

Another little known fact, Papa Hemingway was one of the first to use a stand-up desk. He tucked his typewriter into his bookshelf and stood typing whenever he wrote his fiction. The pictures you see of him sitting at a desk are when he is paying bills and doing other administrative tasks. At least that’s according to his old pal, A. E. Hotcher, author of “Papa Hemingway.” 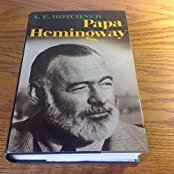 So what do you think? Should I leave the poem up or take it down?

Alas, every trip must come to its end. Enjoyed Sun Valley so much, I opted for another day there, which left me with only an hour or so to explore Boise before catching my flight. I opted for a leisurely ride along the Boise River Greenbelt.  For a trip that started in Spokane with a bike ride, it seemed fitting to conclude with one in Boise. END_OF_DOCUMENT_TOKEN_TO_BE_REPLACED

Took the steady climbing Pioneer Cabin trail #122 up and descended the loop via the Long Gulch trail #123. Minus the snow and ice on the top and down the backside that we encountered, this would be a fantastic trail run. The terrain on 122 is pine needle smooth as you traverse 23 switchbacks through an old growth forest with glimpses of the Pioneer, Smoky, and Sawtooth Mountains through the trees. As you continue up into high alpine meadow, you’ll be rewarded with sweeping views .

But you’re not quite there yet. Just one more push and a panorama of peaks opens up and a rustic cabin welcomes you.

Pioneer Cabin was built by Sun Valley Company in the 1930’s to encourage Alpine skiing. (If I’d known the cabin was open, I would have made it an overnighter.) Underneath the snow, emblazoned on the roof greeting all those who ascend to its heights is its signature quote “The Higher You Get, The Higher You Get.”

Unlike trail#122, 123 is a bit tortuous, very rocky the last 2 miles or so.  Not to mention all the snow we encountered on that trail, but it was all so worth it! This hike makes most people’s list for the top ten in Sun Valley. It’s certainly tops with me.

Left Yellowstone at sunset, sacrificing any scenery to darkness along the 110 mile drive . The first thing you see as you get near city range, glowing  a bit too bright in the distance, is the Mormon Temple. No dark sky preservation here.  It was a bit of a shock to my system to be entering a more congested area (1.6 M pop) after the bliss of the natural parks, historic towns and small resort villages.