Put Nijo Castle on your list of the top 10 things to do and see in Kyoto. (While trip Advisor lists it as #40 of things to do, I’d say the evening viewings during the Sakura (Cherry Blossom) Festival in the spring are well worth the visit.)

Visiting the Kyoto residence of Japan’s first shogun circa the Edo Period, you will be transported to another time and palace. Built in 1603, the castle was completed twenty-three years later by his grandson. The castle and its grounds (including picturesque cherry and plum tree orchards) are surrounded by stone walls and moats.

When the Tokugawa Shogunate fell in 1867, Nijo Castle was used as an imperial palace.  Eventually, it was donated to the city as a historical site and opened to the public.

Designated an UNESCO world heritage site, the castle’s buildings are some of the best surviving examples of the Japan’s feudal era palace architecture.

The 36,000-square-foot Ninomaru Palace consists of five buildings and is built almost entirely of Hinoki cypress, much of which is adorned with gold leaf and elaborate wood carvings.

Interesting fact: The nightingale wood floors of the palace were constructed to squeak as a way of announcing intruders.

During the Sakura Festival in the spring, the castle offers special evening viewings. It mesmerizing to walk under the dozens of cherry trees with their bountiful blossoms dancing in the breeze against the night sky. And the castle, with its moat and fortified walls, is much more impressive glimmering in the moonlight. It’s quite a magical experience.

From Sukhothai, Ayutthaya is an 8 hour bus ride. Feels like another déjà vu travel day, except this time I made the trip in the luxury of the VIP bus. (About $12 – AC, roomy seats with legroom, a stewardess and wifi.) Well wifi was the promise – it was spotty at best so I caught up on my photo sorting and editing. I was heading South so a stop in Ayutthaya was on the way.

Also, did I mention that the open air bus terminals are clean and quiet and don’t allow smoking? Very civilized indeed. 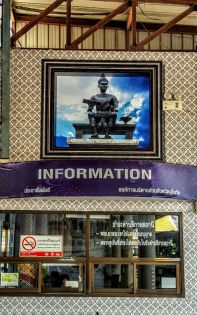 The ancient city of Ayutthaya, or Phra Nakhon Si Ayutthaya, is a former capital of Thailand and the ruins there are designated as an UNESCO world heritage historical park. Ayutthaya was founded in 1350 by King U-Thong when the Thais were forced southwards by northern neighbors. Over the next 417 years, 33 Kings of different dynasties ruled the kingdom until it was sacked by the Burmese in 1767.

Note: This is also a good place to rent a bike to tour around the park.

I must say, after the immaculate splendor of Sukhothai Historical Park, Ayutthaya was a big letdown. Felt like  a déjà vu too with similar ruins as Sukhothai, but Ayutthaya Historical Park is in ruin itself. Unkempt grounds with overgrown weeds, graffiti and litter. Perhaps its close proximity to Bangkok has made it suffer or maybe the community has not made preserving it a priority, who knows?

Tip: Sukhothai is my pick if you have to choose between the 2 historical parks. That being said many of the ruins at Sukhothai have signs that they have been reconstructed so it may be that Ayutthaya is more authentic.

Had a close encounter with some bats in the belfries of one of the temples – hence my post title.

Started the day with a 6am swim at the Imperial Chang Mai Sports Club Resort’s 55 meter pool. Perfect pool for triathletes and swimmers minus the poor air quality here. I’m told the air is only bad for 6-8  weeks of the year due to the slash and burn technique used by regional subsistence farmers. By clear cutting and burning plants, the soil is temporarily revitalized and made fertile for crops. Educational efforts are underway and there is growing momentum to switch to less eco-invasive terrace farming and rotating crops instead. Of course, old ways die hard and progress is slow.

Wanted to get a workout in before sitting on my butt for the seven hour bus trip from Chang Mai to Sukhothai. (Second class with AC is just  ~$9. Great, easy, cheap transportation. I think the short taxi ride from the bus station to the hotel in Sukhothai was more…)

Anyway, the long  trip was definitely worth it – Sukhothai Historical Park did not disappoint. And a public bus ride here is so much better than in the states. It’s clean and everyone keeps respectfully quiet, even the children. Cell phone use is kept to an absolute minimum. By the way, if you make it here, renting a bike is the way to go – only 90 cents. The ruins (some reconstructed) are amazing. The park is immaculate (fastidious workers around every corner) and there are shady trees and moats to offset the scorching heat. Go early to avoid crowds and higher temperatures.

Designated as a UNESCO World Heritage Historical Park, the ancient Kingdom of Sukhothai and former capital of Thailand existed from 1238 until 1438.