I’ve never been to Santa Cruz, but it’s always held a certain allure for me. I was expecting a fun, charming surf town and had planned on spending some time getting to know the area. I took the scenic route (9) in from San Jose. It was a lovely ride through the mountains with redwood forests on either side. It was lovely, that is, until I got within a couple miles of Santa Cruz city limits. Here, the pullouts were crowded with disheveled people hanging out, drinking, smoking, erratically crossing the street, their stuffed cars overflowing, litter and debris everywhere. Are these the official town greeters of Santa Cruz? Yikes. I had intended to camp in the state park here, but made a quick decision that camping by myself anywhere near Santa Cruz would be ill advised.

Don’t get me wrong, not all of Santa Cruz is like that, but there’s enough of this element to make many areas downright unpleasant and uncomfortable. Of course, I don’t go in for the amusement park scene either and Santa Cruz has a big seaside amusement park and boardwalk. The entire area gets inundated with people, especially on a summer weekend. So inundated, in fact, that my map program told me it would take 30 minutes to drive 1 mile. Yikes again. Since I’d been in transit all day, I wanted to take a nice walk. Not knowing where to go, I headed for the beach and ended up by the squalor of the boardwalk. My stroll took me through neighborhoods with boarded up and ramshackle homes and through other undesirable areas where street people were lurking under bridges along the river trail. Second impression was as bad as the first. Wouldn’t recommend walking alone at night around here at all. To top it all off, my Airbnb had a port-a-potty and an abandoned couch out in front of it. I paid $115 for the dubious privilege of spending the night in a dingy, dirty, dimly lit dump. Everything was sold out so I was out of luck and I was too exhausted to drive any further. Luckily, the sheets and towels were clean.

The next morning, I discovered one of the most beautiful areas of Santa Cruz, scenic West Cliff Drive, with its gorgeous homes, famous surf spot, “Steamer’s Lane” and Natural Bridge State Beach. If you’re looking for a coastal stroll in Santa Cruz, this is the area to take one. Third impression of Santa Cruz, much better.

I took a yoga class on the beach at Natural Bridges State Beach – spectacular setting, lame instructor. I’m all smiles before the class. 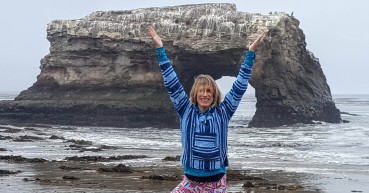 Despite posting extensive credentials, the instructor didn’t seem to know yoga flow, was too chatty and stunk of body odor. (Was he sleeping in his car too? Had I been scammed?) He had 29 reviews and they were all good???  What? When I’m on vacation time, my time is precious and I don’t want to waste it. If someone is advertising yoga and hyping their credentials, I have certain expectations. Definitely wouldn’t sign up for his class again and I am officially responsible for the 1 negative review currently posted. (Guess the class would be fine for beginners – maybe?) Santa Cruz disappointments kept racking up so I decided to leave town for a scenic drive up the coast to Half Moon Bay. 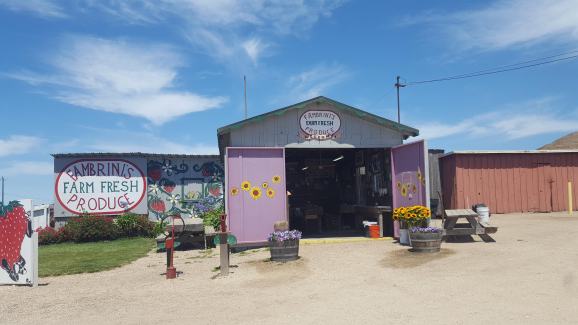 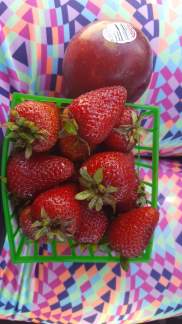 The scenery did not disappoint. The central coast is ravishingly beautiful and gives a sense of a pristine California before people invaded. 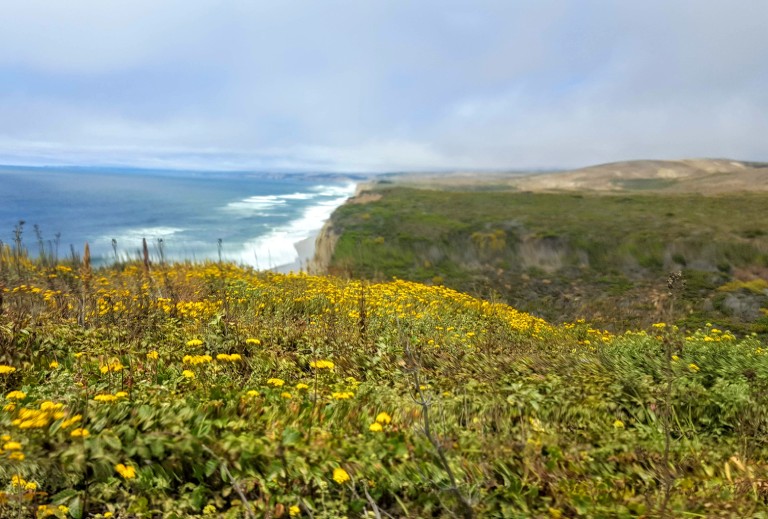 Five miles south of Pescadero, you’ll find Pigeon Point Lighthouse. Built in 1871, at 115 feet high, this is the tallest lighthouse on the West Coast. It is still an active navigation aid for the Coast Guard. The light house has a cool hostel with a jacuzzi you can rent out at night. Looks like you’d have your pick of secluded beach coves too.

But I spoke too soon, much to my dismay, every spot I stopped in a pullout, there was litter strewn about. In one spot, I filled a paper bag within a 2-feet radius of my car. Humans really disgust me sometimes, especially Americans and others who trash their environments. We are a 1st world country that acts like a 3rd world country in many respects. It really disturbs me. Any of you old enough to remember that American Indian PSA commercial about littering? The one with teh Indian Brave who has a tear rolling down his noble cheek when he observes a littered area? Cliché, I know, but that’s how I felt – it’s heart breaking to see nature ruined. I stopped to find a spot to have a picnic and saw filthy underwear, antifreeze containers, all kinds of grotesque detritus of car transients etc -all within 25 feet of the ocean.

I spoke to a Park ranger and she said, “We just can’t keep up with it.” I hate to think of what this coast will look like in another 5 years if things don’t turn around. Where is the respect for nature? Where is the personal responsibility to clean up after yourself? Animals behave better. 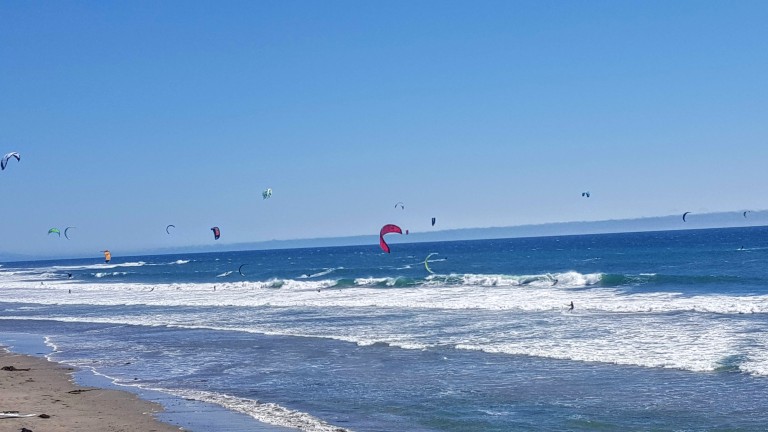 Watching the “uplifting” wind surfing and kite surfing on the way back helped lift my mood a little as I contemplated my next move. Stay tuned for my Carmel / Monterey experience – it did NOT disappoint. Highlights include Point Lobos, two epic bike rides and more to come.